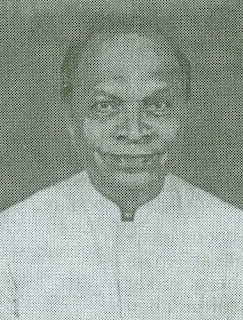 Yesterday (12/3/13) marked the end of another well-known figure of the Tiatr fraternity and a prominent businessman of Mapusa, Mr. Shrirang Pandurang Narvekar. He dominated the Konkani stage both in terms of acting and stage setting. He was ailing for sometime but he made it a point to come and occupy his seat in the shop, every day, at least in the evenings. He was 75 years old.


Shrirang came from a poor family. He was a hard worker, who loved Goa and his mother tongue, Konkani. He began his acting career in Marathi plays at the age of 9. He was an excellent actor. He was a lover of music and drama. He was a playwright and also produced dramas. During the 1970s, Shrirang occupied the centre stage in the field of Konkani drama. Besides acting in Konkani tiatrs, he also acted in the first Konkani film Sukhachem Sopon.
Last December, the Mhapxenkars felicitated him on his 75th birthday. He was very happy because my wife and I attended the function. Besides receiving ‘Lifetime Contribution to Tiatr Award’ at hands of ex-Chief Minister, Mr. Digamber Kamat, in December 2011, he also won many other awards. In his homily, Adv. Ramakant Khalap said that he had proposed Shrirang Narvekar’s name to the Goa government for the Padmashree Award but sadly it did not materialize. Shrirang was a councillor of Mapusa Municipality from 1976 to 1982 and was also the President of Sarvajanik Ganeshotsav committee and a trustee.


When Mapusa did not have a decent theatre in the late 1960s and early 1970s and staging of tiatr in the town was a difficult task, it was Shrirang who initially erected his mattov in the open area next to the Central Talkies (now the State Bank of India stands tall in its place), but later he shifted it to the fields of Jaganath Khalap, opposite the police station. This could easily accommodate a crowd of 2,500 to 3,000 people. The mattov would be built around September-October and dismantled by April-May.

This mattov of the late Shrirang was quite famous and had created a revolution of sorts in Mapusa as people would rush to see tiatr in this Narvekaracho Mattov (Narvekar's Pavilion’. Though the tickets were cheap at that time, there was an ample comfort in his mattov for people to sit and enjoy the tiatr. Konkani drama troupes from Bombay would also come to Mapusa to stage their performance in the mattov, which he ran for 25 years. He also had a mattov in Panaji, which he ran for six years.


In the 1970s, the late Shrirang was a staunch supporter of late Jack Sequeira’s United Goans Party (UGP), and, later in the 1990s, he joined the United Goans Democratic Party (UGDP) and was also its president for some time. In their speeches, Mr. Surendra Sirsat and Adv. Ramakant Khalap, praised Shrirang’s talent for drama, social work and his political career. They said he spoke ferociously against the opposition but when it came to socializing, he never mixed friendship with politics; thus, he maintained his friends’ circle intact.


Shrirang was one person who knew every single Konkani tiatr/film actor/actress personally and that was because he had interacted with them during the course of tiatrs. He was a knowledgeable person. He helped me a lot during the research of my book “MAPUSA - Yesterday and Today”. He gave a small speech at the end of book release function. We became very good friends since then.


Politicians cutting across the party lines including Deputy Chief Minister, Mr Francis D’Souza, and Mr Surendra Sirsat, who had a close association with the late Shrirang, have condoled his demise. Mr D’Souza said that a towering personality in the field of drama had passed away leaving a big void, which was difficult to fill.


The cremation took place today at 11:30 am. A lot of people attended the funeral – I saw Adv. Aires Rodrigues, Floriano Lobo, Ubaldo Braganza, but I did not see any tiatrists at the cemetery. Perhaps, they paid their last homage to him at his residence.


The late Srirang is survived by his wife, two sons, a daughter, son-in-law and grand children.
May Shrirang Narvekar’s soul rest in peace!
Moi-mogan,