This message is to convey my heartiest belated congratulations to the eleven tiatrists who were recognized and awarded lifetime achievement awards by the Tiatr Academy Goa (TAG) on last Saturday, December 14, 2012. 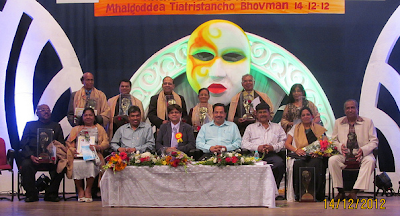 Nowadays, I don’t travel long distances because of vision problem – underwent laser surgery on my right eye to rectify leakage in the retina; even then I had planned to attend the function in Margao but unforeseen circumstances did not allow me to fulfil that commitment.
This year the Tiatr Academy Goa has conferred lifetime achievement awards on eleven eminent tiatr personalities and they are: C. D'Silva, Jessie Dias, Jr. Rod, Diana Fernandes, Josefina Dias, Betty Ferns, Joe Rose, August De Panchwadi, Manuel Dourado, Roseferns, and Tomazinho Cardozo.

I have known all these actors/writers/ directors/ singers on stage but I would like to make a special mention about Betty Ferns with whom I have acted in Bahrain:
During my tenure as the General Secretary of the Young Goans Sports Club in 1977-78, for the first time ever, we brought five famous Bombay Tiatrists
– C. Alvares, Remie Colaco, Jacinto Vaz, Mary Vaz and Betty Ferns, and staged four tiatrs in Manama, Bahrain. Cyriaco Dias was employed with MENAS (Middle East Navigation Aids Service) in Bahrain. Therefore, though he was an ex-Bombay tiatrist, he was considered a resident actor.


I have acted with Betty Ferns in four tiatrs in Bahrain: Ghorachem Sukh by Remie Colaço; Govachem Ghor by Jacinto Vaz, Farikponn by Cyriaco Dias and Kednam Udetolo to Dis by C. Alvares. I was already an established actor in Bahrain since 1973 but it was a great experience to act with the above-mentioned five professionals, and that too from Bombay. I also acted with the second batch of other Bombay actors in Bahrain the following year; more on that next time. Tiatr were held in Al Nasr Club in Manama. 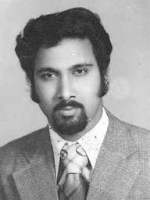 I enacted main roles in the first three tiatrs and a movali’s (gangster’s) role in Kednam Udetolo to Dis. This role was originally played by the late Young Mendes.


The scene was thus: Betty is a blind girl who crosses road with a kerosene lamp in one hand and an empty glass bottle (to fetch kerosene) in the other. I try to help her cross the road but since she was alone, I look around, take advantage and try to rape her. During my struggle with Betty, suddenly Jacinto Vaz passes by, picks up a fight with me and rescues Betty. Jacinto Vaz punches blows at me and knocks me down. It was pitch dark. At this juncture, dim coloured stage lights flash in all directions. I try to get up and run away. Here a real accident takes place. When the glass bottle which Betty was carrying fell on the ground it broke into pieces - unfortunately, the floor was bare – it was not covered with carpet or anything else. As I got up and was taking off from the floor, the bottom of broken bottle, which was lying next to my hand, cut a big chunk of flesh from under my left thumb and blood started gushing. As soon as I went inside, everyone was shocked to see me bleeding profusely. As an emergency treatment, the actors brought a Whisky bottle and poured it on my wound sending a burning sensation on it. They also poured Whisky in a glass and made me gulp it – anaesthesia was applied externally and internally!


An announcement was made and public informed that I had received a cut on my hand and was taken to a hospital for treatment, and that tiatr would recommence soon. They rushed me to the Emergency Section of the Mission Hospital, which was just around five hundred meters away. The organizers explained to the doctor the situation and the need for me to be back on stage as soon as possible. He sutured the flesh, bandaged my hand and discharged me. In the meantime, tiatr went on and I was back right in time before the start of the sovo poddo or the sixth drop/part of the tiatr.


In this scene, I am tied to a chair and questioned. Jacinto Vaz, who was a natural actor, keeps slapping me and asking: “Tuka cheddvank rape korunk zai? Atam mar kha”! (Do you want to rape girls? Now take the beating)! – these lines were not in the script; he added them. Actually, I was in pain and this guy, Jacinto, was making me laugh but I had to control myself because it was a serious scene. I recovered from the cut after about three weeks. 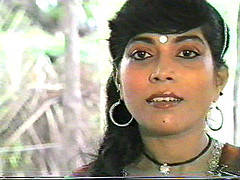 In order to make these actors feel at home, we temporarily converted three rooms of the Club into bedrooms and in one of the rooms we set up a kitchen and hired a Goan cook who cooked dishes of their taste. They spent six memorable weeks with us resulting in close relationship. This is when I got to know the five actors intimately. Goans in Bahrain would visit them at the Club premises every evening and many took them out for dinner or lunch on Fridays (holiday in the Gulf).


In 1978, I visited Betty Ferns at her home in Bombay, and the others in Goa. I showed them the scar of the wound, which looks like a question mark, as below that scar there is another scar of a bone grafting, and told them that it was the trade mark of “Kednam Udetolo to Dis”!


Remie Colaco and his family, Jacinto Vaz and his family and my family had a full day picnic at Sanvordem Lake. It was the month of May. We bathed in the lake and drank plenty of Urrak. Remie was a very good yodeller; so, he sang songs and yodelled every now and then and kept entertaining us. Jacinto and Mary Vaz visited me twice at my home in Anjuna for lunch. May their souls rest in peace!


Betty Ferns is the lone surviving actor of the troupe that visited Bahrain in the 1970s. I very much wanted to meet with her but circumstances prevented me from attending the function in Margao. But I will somehow meet her on one of these days.